Les Campbell tells the story of his great uncle, Thomas Bertram Campbell , who served and sacrified in the Great War.You won't findhis name  on any Roll of Honour and doesn't have a Commonwealth War Grave but perhaphs should . Read On . . . . ..

Until this photograph turned up at mums, I didn't know much about Bertie, other than that he died shortly after the end of the First World War I scanned the photo and enlarged it and traced the Regiment from the Cap Badge Bertie is wearing it belonged to the Westmorland and Cumberland Yeomanry. Unfortunately my initial searches on the military web sites did not find him, and this is due to an incorrect interpretation of Berties Name and home Address by the clerk who entered Berties details. The web site listed him as Bartie Thomas Campbell living at jesties lane, Cleaton. (Yes Believe it Jacktrees Road Cleator)

Bertie was transferred into the 5th Battalion Border regiment, due to a shortage of infantrymen in 1916. The units were amalgamated and Bertie and his comrades retrained as infantrymen. I did some further research and actually found his enlistment attestation details, and have copied these and attached them on the following pages. Bertie was wounded, it appears from shrapnel, and was shipped back home to Carlisle, where he spent a long time convalescing in Fusehill Military Hospital (Currently being used by the University of Cumbria for Training of Nurses and Teachers). Apparently he struggled to fight off an infection, and the doctor's notes are also attached.

The Border regiment military museum, kindly sent a brief history of the Campaigns in which the 5th Battalion served, although I have not copied these as they are probably only of interest to the military historians amongst us, but I do have hard copies of the documents.

I managed to source and Purchase a Genuine World War 1 Westmorland and Cumberland Yeomanry Cap Badge. The badge is identical to that which Bertie is wearing on his hat in the previous photograph.

Having been discharged from the army prior to the end of the war he finally succumbed to his wounds and died on Dec 5th  1920 aged 27 .

His is remebered on a memorial in the grounds of our lady and St Josephs church on Warwick road in Carlisle. Bertie Campbell name is on the memorial, even though he died after hostilities ceased in 1918. I visited the memorial recently as it is opposite, my wife Claire's dentist. Small world! 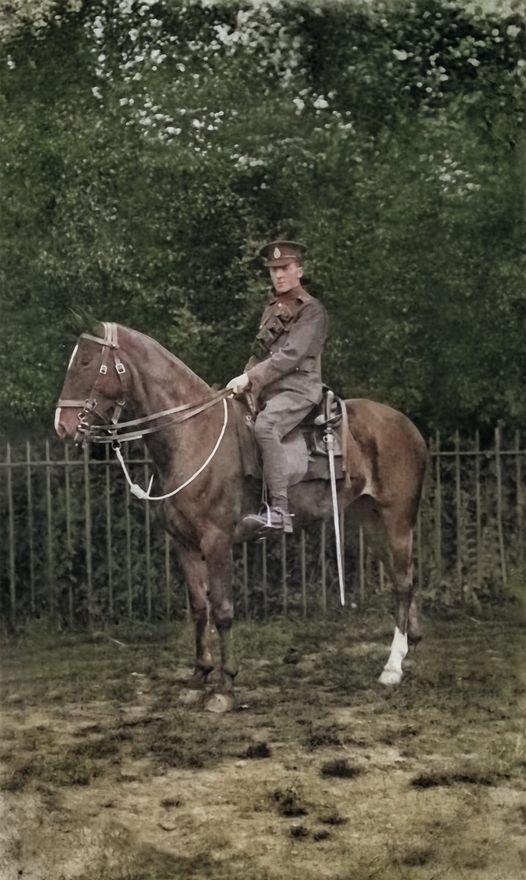